The term "incarnation" has it's root in Latin. The meaning is like "going into the flesh".

This term is very often used in spiritual and religious context.

I think we Protoi use it more literally.

We "down here" in 3D are the Outer-Cores, as you can see in this topic (http://forum.presbeia-protoi.org/viewtopic.php?f=72&t=1934). You can imagine a picture of the OC as a chain of pearls. There are two options how the OC can connect to a body.

Option one is, the connection of the OC to the body is made through special connectors located inside the body. This kind of connection is what we call "incarnation". We call bodies which have OC parts inside "aspects".

Option two is, the connection of the OC to the body is made through special connectors located outside of the body. There are no OC parts inside the body. This kind of connection is what we call "avatar connection". We call bodies which have only outside connections avatars.

Our physical bodies are avatars. The darks made manipulations in all of us, which make us believe that we ARE this avatar. For example they made wrong connections and also connected the avatar cognition units (e.g. visual, acoustical) to the aspect cognition units, instead to the avatar cognition units. The effect of this is, that the focus of our mind is in 3D, we "are here". But all these don't change the fact, that no one of us is here and that 3D Earth is just an avatar planet. All humans, animals and plants are only avatar connected.

So this leads to the question "where are we"?

Here is a simple sketch I made about and was put in shape by Pegazus: 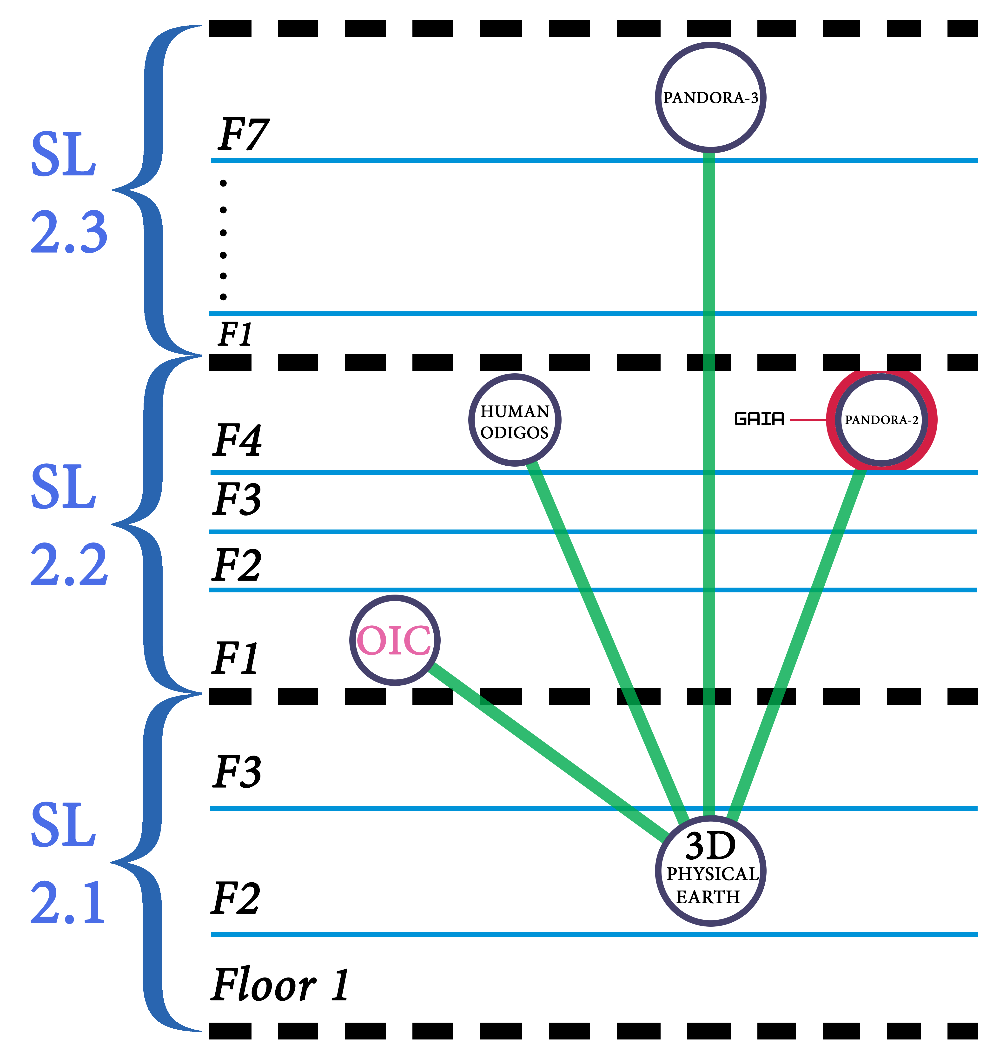 The sketch shows a part of our property, it's the part we call "space 2". There is a space below us, but this one doesn't affect us in our space.

The space 2 has 3 space levels (SL), each level has a few floors. (See more details her: http://forum.presbeia-protoi.org/download/file.php?mode=view&id=95)

Our physical 3D Earth is located in SL2.1F2 (space 2 - space level 1 - floor 2). All people down here have 5 different incarnation places. The number of those places has been 23 in the past, but we had to cleaned it up, so there are only 5 left.

The first place is the 3D Earth itself. The OCs of all darks and all others who got taken to prison, have been taken to their physical Avatar and have been attached to them in the non-string region of 3D. So they are kind of "excarnated" in a non-string region, their OCs and OC parts are not in any kind of body or cover.

The second incarnation place is the OIC, which is in the region of SL2.2 (but off grid...). About 22 million of people are connected from the OIC down here into human avatars.

We call the fourth incarnation place "Pandora 2". This is the next higher world belonging to the evolutionary ladder of Physical 3D Earth. Some would call it maybe atsral Earth, but I think this is a bad term. A very long time ago before these planets got misused, "Pandora 1-3" were their original names (so in fact we Protoi often use the name "Pandora 1" for physical Earth...). Pandora 2 is a hollow world, this is also a reason, why many people think our physical world were a hollow world. But this is just a "tricky" cognition (and another topic...). All G and all L classified ones, who are highly polluted are connected down here from Pandora 2, about +/- 430 million.

The fifth incarnation place is "Pandora 3", located in SL2.3F7. This whole SL2.3 was destroyed by the darks. The Protoi rebuilt it in last year including a new "Pandora 3". All L classified people, who are not too high polluted are incarnated there. These are about +/- 120 millions connected from Pandora 3 to the 3D human avatars.

It is important to understand this situation. To understand 3D, especially for the OIC incarnated ones. They are very much tricked, because they have additional rules in the "Earth/Pandora" planets in their own OIC timelines. If their physical avatar moves in 3D, their aspects have to follow exactly to the locations on their "Earths". And with the former mentioned tricky cognition manipulation, they have often real problem to get these separated. But to separate 3D things and cognitions from OIC inside things and cognition is a fundamental imperative, if they want to realize their own situation. If they can not separate this, they will continue to always get tricked by the OIC trap system...

Incarnation.jpeg
(337.54 KiB) Not downloaded yet

Pandora is a name from ancient greek....
Top

- so, when an entity wanted to incarnate in a planet or a place in order to gain perspective and develop itself in their own evolutionary development.. The small part that goes to incarnte, it turns always in "other" being?? Like the case we are now.. Our analogues are other beings, even if we were once one.

The entity feeds himself from the experience his part is gaining.. Being the parte a sovereign being? Or in some cases thr entity can entre a propety somehow?

Do the fractal rules apply to all SL floors, except OIC? Probably a stupid question, since we are not here incarnated in the Avatar it must be that way, or how else should fractal evolution affect us otherwise?
I guess that's also the reason why I feel I'm somehow from here and somehow not at all, since no one is really 'here' in 3D...
Top

They only apply to this floor, nowhere else...
Top

They only apply to this floor, nowhere else...

I know you don't have the time to answer questions, but how do they benefit us on this floor if we aren't really 'here' and just connected to the avatar? Is it through the connection that it influences the OC's, or is it because the 8% are really 'here' on this floor?
Top

They only apply to this floor, nowhere else...

I know you don't have the time to answer questions, but how do they benefit us on this floor if we aren't really 'here' and just connected to the avatar? Is it through the connection that it influences the OC's, or is it because the 8% are really 'here' on this floor?