and i was wondering about the extra protection

its like sitting in cinema on first row.....well would say....you are right. They really dont like your well meaned present for valentines day..

This is a minor topic, as we are more protecting our things, than blocking dark shit.
Darks don't know how to manipulate with layer 3) anyway...

Now we installed a global shield in layer 4)

Now is a very special attack running.
A similar attack on all major dark bases and strongholds.
All blackmailing situations and all other dark facilities.
And this in whole property.
Here in 3D, in the other floors, in SL2.2 in SL2.3 in OIC and every base or mini creation! ALL!

Special is now, that all 118 million officers have been included in our strike against the darks.

The first attack was done by all our officers with cute little butterflies...

They did not see them coming, they were not able to defend even against a single attack.
The butterflies targeted all main systems in all dark facilities, and took them all out in a single strike.
No weapons of darks work atm.! The butterflies did not destroy them, but destroyed main components, so that all of dark's power is offline.
Now we will destroy it with our forces...
We did a little upgrade...

everything dark gets literally ripped into parts and blown up , darks are just looking and really panicking around.
it´s like a flood hitting them hard. really hard. a little dot getting hit by an wave 100 to 1000times bigger than the dot.
unimaginable big..

so, where will be the party taking place after the war?

its interesting...thanks to Frank for the bigger shield....was going outside, when I noticed that your defense system was starting to fire at something near. was curious (sorry....i am a woman

dont know exactly how to discribe but I told Frank I will try.

There was a kind of castle that was totaly blown away...there were cages but nothing in it anymore. mechanic parts (looked like) lie around and I saw something like a machine that was driving around and picked it up like a trash car...

Its not all times easy to identify what I see, because the brain translation sometimes is a little bit weird

In the "sky" there are big shields to see, blocking something that looks like dark water. there are some "sparkles" under the shields and it looks like they make the shield bigger.
While I was looking around, saw other pictures too....but not from this floor I was. No nice pictures...well I know its a reason to be happy, but my mindtranslation showed me pictures of a big fight and many wounded beeings....not only darks. And I saw something like a not yet active army of darks, waiting. I dont know exactly what it means, but feeled like a trap.
Top

Nούφαρο wrote: And I saw something like a not yet active army of darks, waiting. I dont know exactly what it means, but feeled like a trap.

These are battle bots. There are thousands of places like these...
We simply deactivated all those bots with the butterflies...

Someone will care about them, after the important things are done...
Top

And ~15 minutes ago we activated a shield in the layer 3.o) which we also call orion layer, which is the energetic part of the human nervous system.
This shield protects against ~600 kinds of direct energetic manipulation, and got installed in all L-ones, and all who are under our protection.
Top

A next very huge cleaning started 20 minutes ago.
It runs parallel to the ARMAGEDDON cleanings.
This is the biggest single step and cleaning, but it is very different.
Only a smaller part of the cleanings (still huge) take place here.
I will talk about the major parts later.

The smaller parts is about cleaning what we call "embedded switches/systems" and "embedded bases".
These are created by using the same very newest masking technologies, combined with a lot of hiding tricks.

Darks build ~732kk switche systems inside the Reality Mechanic, the media for the info. These is much more than the external based switch systems.

They also build + 132kk embedded bases, most of them into the Support Mechanic of 3D.

All got again first attacked with butterflies, so that it is not all cleaned, but all main systems are down already.

The major part of the last cleaning is not here.
It is far away in the "Prime Creation", where most of us originate from.

All 5 dark groups made there huge bases with embedded technology.
For example we found there 4311 billion lvl1 battle clone entities, and ~332 thousand lvl1 original clones...

So darkies, bad news for you.
There will no reinforcement arrive...

They are all in prison now.
Top

Right now during the still running ARMAGEDDON cleanings, we are cleaning SL2.2 Pandora 2, the planet "above" us in the next Space Level.

In detail we are cleaning all cells of the SL2.2 honeycomb structures.
I will in short explain what it is. Pls see here for the energetic rules layers of Earth.

You may know, that there is a lot of space inside atoms. Much of this space is filled by the Reality Mechanic (RM). But by far not all of it. So in layer 0) we have about 51% of "free" space. And darks did a lot of shit here in this space, like many of those switch systems I was writing about in the last days. But here on Earth this space is unstable, cause of the complex fractal structures.

So even if SL2.2 has totally different physics and different Reality Mechanics, it also has a very similar layer 0). But SL2.2 is not complex fractal. This is very important, because this has the two effects, that 1st this space is stable, and 2nd that 76% of the space is free. And darks (in detail orions) used this space and installed a kind of honeycomb structures. Every cell in the honeycomb structure got a very simple compressed EL4 IR sub-grid (= grid within another grid). By this each of the cell got a single habitat. If you compare the habitat physics and sizes to our Earth 3D reality, each habitat has an average volume of ~3.210 km³. There are about 410 billion of these habitat cells in the honeycomb structures of SL2.2 Pandora 2!

The darks made deals with each other about using the cells.
So many of these "dimensions", "layers", "levels" or other terms used by spiritual people are very often referring to these honeycomb cells. Darks changed in some of the cells the grids to EL5 or even EL6 sub-grid, so that for example there is a cell with EL6 grid, that has a comparable volume of half of our galaxy...
No problem to install there the huge illusions, which fool so many people. But don't confuse this with OIC. OIC is an own outside mini creation, based on VR tech.

So the above is only valid and interesting for NON-OIC incarnated people. OIC is completely different from this.

All these cells will get cleaned and sealed in the current 3rd ARMAGEDDON wave.
Top

Most dont know, how to introduce this habitat cells in the honeycomb structures, I guess….will try to explain…. Me and two of my friends were also incarnated in such a cell…long time before we knew what it is, we started to do some energetically things and we also knew this structure…we tried how to leave, what can we do at the walls and such things….was funny sometimes because we slides around the walls mentally or used energy of the walls, when someone was out of energy. One day in a exercise we realized, that there were a kind of white guardians at the walls, and we saw, that they took energy out of it….well…we tried too and it worked.

This cells are a little bit like a round cage. We tried to leave sometimes, but got strong headache and behind the wall of our cell, there was only darkness. That’s why we don’t tried it again. Only thing we did, was working with walls energy. We named it the “station”.
Yesterday I read Franks Post and a short time I was not able to understand, that this structure, is our station. He told me he did something that I can look without headache and I tried to zoom out as far as I can. First thing that happened was…started to cry, without knowing reason. Honeycomb is really a good name for it but I would name it “vine”. The cells are more round, but when I zoomed out, I thought “wow…this are millions”
The most of the cells are dark…nothing to see…and a few are light. I don’t know exactly if anyone “see” this cells same way, and we really didn’t knew what it was, but for me it was a kind of mentally “working place”. We could build there a few things together and we tested many things. We build a kind of elevator at the grid net, to drive around the walls, because we wanted to know, what else is this wall for….

Frank asked what it looks like…but the truth is….there is nothing else (to see), as a black floor and a wall looks like a grid net. And there are things you build by yourself and this white guardians.
They didn’t took really notice of us. Sometimes they helped, to install a line for energy, but other time, they ignored us.
Don’t know how to describe other way, but if you have questions, be free to ask. But there is not really much to say…it’s a big nothing with interesting walls…and outside it was only dark and sad.
Top

In the planet centre there are the host computers, which are already in huge blue and green flames for weeks. Between the planet centre and the planet shell there's a lot of corridors and hallways (similar to the Death Star in Star Wars Ep. IV "A New Hope"). In the inner side of the shell is completely covered with honeycombish structures, which were the living area for the planet's inhabitants. 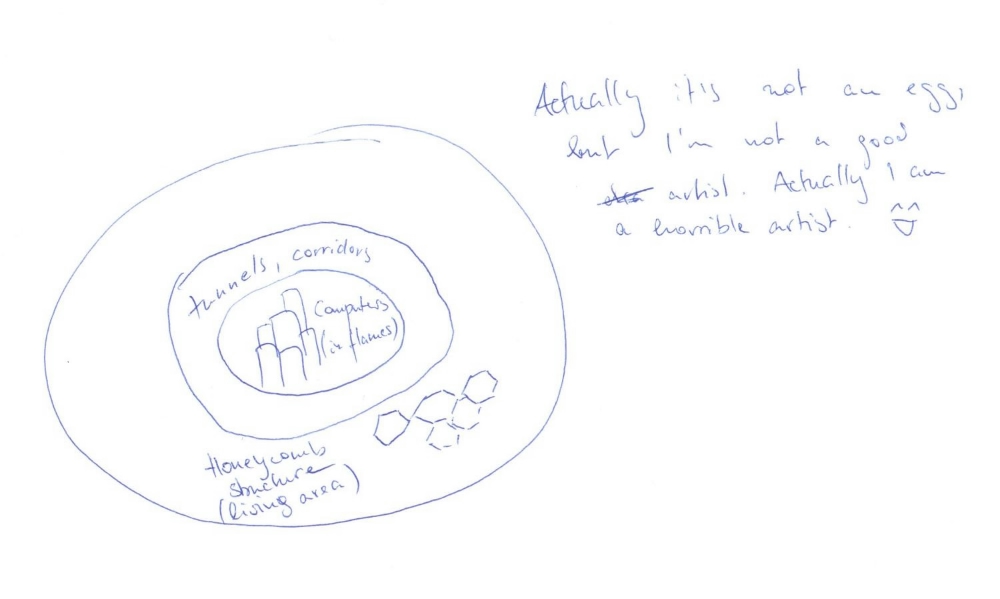 All cells of SL2.2 honeycomb structures have been cleaned and sealed now.

All darks have been brought to prison, all Ls and Gs have been moved into new habitats.
Top

inside the combs are very much different things to see.

in one comb it was just a livingroom styled in a 80´s look, the other one was a big city looking greek.

it´s mostly like (from my point of view) that there are bigger combs and if you more into it you´ll see tons of little combs. and inside those are very much different things to see.

much interesting stuff to see. sadly i can´t enter those.
Top

A few minutes ago 4th wave of ARMAGEDDON cleanings started.

It's the OIC cleaning...
Top

15 minutes ago a next very, very huge cleaning step started, parallel to ARMAGEDDON cleanings.
This step is about something that I call "nano embedded".
It is all about some very tricky kinds of hiding dark, their troops and the facilities.
This is not on the surface visible, and this is very much.
For example there are ~8200 billion lvl 1 battle avatars.
And much more shit. All of them try to reorganize and strike back on us after Armageddon cleanings.
But I am sure, we are faster...

Users browsing this forum: No registered users and 2 guests