The nebadon defense is down,
I am hunting now the darks inside...
Top

Nebadon also have been the last big energy storages of the 5 dark groups.
All other were already destroyed by us in the past.

All the energies from prayings and meditations have been taken there, and from there distributed back to the darks.

Nebadon is history.
Totally destroyed and even the ruins removed.
Top

Until today we found ~127.000 different kinds of energetic infections.
About 80% of them were connected in whatever kind to nebadon and protected by nebadon.

After nebadon is gone now, we are developing optimal tool for removing the infections
and will soon start to to remove them on global scale.

The 5 dark groups had deals with each other to infect the 3D people from nebadon.
Top

Some visual impression from 4 people in skype chat about the firestorm... 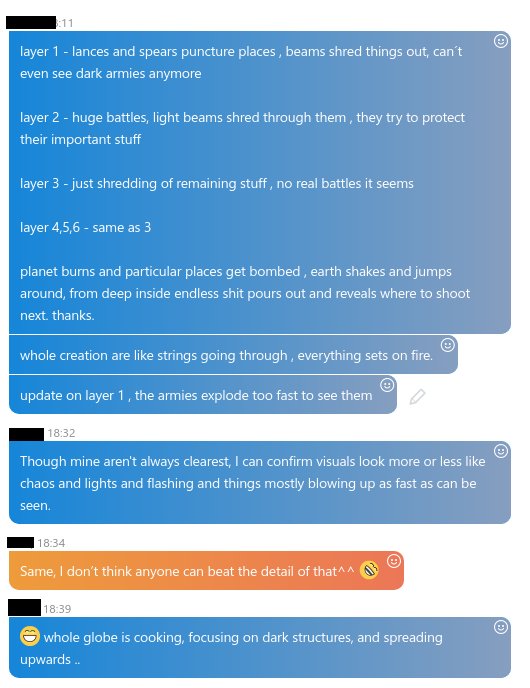 if you are sensitive to such energies it can be that your body temperature rises up.
visuell it looks like fire waves, which changes colors when they are around a light one....into green-blue....
the flames burnes all off of their way...
i am interested to know, what the sounds are for, the flames make...looks like they smash some kind of bubbles before fire reach

there are some battles....looks like darks try to safe something
Top

In the past, darks fooled the light into agreeing to cancel a third of all light rules, and put dark rules in their place. This was not just for here, but for EVERYWHERE!

As of now, all dark rules have been removed, and ALL LIGHT RULES ARE RESTORED EVERYWHERE. We are now taking out all dark installations and everything dark, everywhere.

After 18,800 years (and billions of non-linear years), all realities, all existences, all of creation, is finally being brought out of the darkness and back into the light.

Soon, all darkness will end, and we Protoi will prohibit any darkness EVERYWHERE and for ALL ETERNITY.
Top

One of the first effects of the new rules is, that now soon for all our 4 billion people a very much stronger healing will start.

They are very noticeable, similar like big energetic attacks. But much more gentle, and after a short time, they healing system will adapt to your body and reduce the side effects more and more as long as the healing is running.
Top

The biggest battle ever is over!

It was the battle about "The Veil".
The incredible huge veil protection is down now,
soon we will also finish the removing of all dark facilities and functions of the veil.

This is about the real Veil, not the bullshit one talked about by 'lightworkers'. This is an enormous superstructure built by LSA2 after the American Civil War, and after the 443 billion Protoi group planets genocide by Orions, Taurus, LSA1 and LSA2. The purpose of the Veil was to lock down all possible energetic manipulation on 3D. Each of the 5 dark groups had an equal quota by which they could directly manipulate 3D energetically, they made deals about this, and this was the purpose of the Veil, to secure their own ability to energetically manipulate 3D and prevent any and all attempts from outside to manipulate 3D that is outside of the darks' quota system.

The Veil had connections to every incarnated being in 3D, some had multiple connections. The Veil also contained every possible kind of dark shit. Using these connections the darks were able to push through whatever shit they wanted to whoever they wanted, such as pains or artificial emotions. More dangerously, they were able to induce, for example, schizophrenia, and even more extreme, were able to produce a massive, intense stroke in a target, which would result in an extremely painful, albeit near-instant death. By these mechanisms, the Veil would attack anyone who attempted to energetically manipulate 3D outside of the quota system, and would also kill anyone who attempted to attack it. Until now, NO ONE that has launched an attack on the Veil has survived.

The Veil is constructed of 3 parts: Front, middle, and rear.
The frontmost section contains countless numbers of battle clones in separate, secured cells, with each cell locked on every side by four separate locking technologies, one from each of the other dark groups apart from LSA2 (who built the cells and the Veil). These battle clones were not able to leave their cells to defend each other or to escape from the Veil superstructure. The number of battle clones placed inside the Veil far exceeded all other dark armies outside of the Veil by many orders of magnitude.

The middle section of the Veil contains the actual 3D-manipulation machinery. This appeared to me as complex machinery composed of silver, metallic balls moving around on wires. This machinery extended upwards out through the Veil superstructure and continued all the way to 3D. The machinery had a special kind of energetic protection, and in itself also provided an extremely strong protection on the Earth's surface: an extremely strong metallic mesh-grid, completely enclosing the surface of the Earth, dotted by metallic-silver "nodes". This provided complete energetic protection against outside energetic manipulation. Each node was locked with technology from each of the other four dark groups as well, and this provided them with access to the energetic manipulation abilities of the Veil. As mentioned above, each of the five dark groups had an equal "3D-manipulation-quota" with which to manipulate 3D energetically.

The deals about the Veil were as follows: LSA2 would build the Veil, and to ensure the security of the other four dark groups from the possibility of massive numbers of LSA2 battle clones being released to attack them, they would lock every cell with a unique locking technology. These locking technologies were constantly updated by the other four groups, and the cells and the Veil was strictly monitored by them to ensure that LSA2 held up their side of the deals.

Visually speaking, the Veil appeared as an enormous "hotel structure", with all the dark battle clones in his own cage or "room". Beyond the countless front-line darks and the Veil machinery, was the rear part of the Veil, containing much larger cages or "rooms", each containing a level 1 clone entity. Each of these cages were also secured with four kinds of locking technologies from the other groups, but unbeknownst to them, LSA2 built a secret back door by which the level 1 clones could exit the structure if they so wished.

Another note on the dark quotas: in the past, there have been financial manipulation systems in Layer II. Similarly to the Veil deals, the 5 dark groups made deals about how to construct these manipulation systems, and each had equal quotas for using these systems to manipulate, for example, Forex and the stock markets. For instance, certain markets would be assigned to Taurus, certain markets to Orions, and so on.
Top

Thank you all! No more enslavement, torture and horror

I was going to place healing crystals throughout my town but now it ins't necessary or i can still do it?
Top

I wish everyone a Happy New Year!

I am sure in future this year will be known as the year 0 (zero).

The first year without darks and darkness!
Top

Happy new year for you and for everyone else

Frank wrote:
I am sure in future this year will be known as the year 0 (zero).

The first year without darks and darkness!

That is my wish too!

Happy new year frank and everyone else!
Year 0 would be awesome!
Top

Information for people with cognition:

We protected all cleaned areas with a kind of "light fog".
If you are in such an area, you will only see light, but will not be able to see through it.
This also means, that nothing dark will be able to reach you through the fog.
Top

You can write me anytime in english or german