Here is the next Schumann chart, on which 4 of our actions are direct visible (or better to say their side effects):

I added many information to the posts about the "The Man Behind The Curtain" topic and to the "shadow-body" topic.
Top

The last wave also made some visible effects on Schuman when the wave started:

Here is what the last special cleaning was about:

The installed shit was a "gift" from the orion group.

This cleaning had to do with brain-function and sexual functions. Mountains of shame and apathy-producing triggers were inserted into the sexual organs of thousands of people, making it impossible for them to have sex. At least, without first overcoming centuries of shame, produced by the person themselves (post-facto, after being inserted into their bodies) - making it seem like the person was the source of their own troubles; another neat big trap!

Blaming themselves only made it worse, and prolonged its effects. The real cause is "explosive devices" connected to both brain and sexual organs. When one of millions of pre-chosen triggers went off, that person was, for an hour or more, rendered utterly/totally helpless and without hope; sex thus became impossible.

---
(visual)
I see a large mountain on the left, it has small little "explosives" buried inside it, these are connected by wires or connections to a long vertical line of people that are practically touching each other; they're extremely close. Each person seems to have 2 connections to the mountain each - 1 to the brain, and one to their sexual organs.

It's a hostage-situation. Removing one would explode all.

Also, the pain and shame travels up & down, gets shared by the group... (but original source is in the mountain)
small little particles of shit. The mountain has countless amounts of it to supply.. & keeps pumping in more.

This cleaning is actually a big hostage situation involving thousands of people; connected by wires/mechanisms to a gigantic "mountain" structure filled with all negative things: guilt, shame, apathy, and it has all of these by the truckload (or more), a nearly INFINITE supply.

All the people have 2 connections to the mountain (and are very closely connected to each other, too): one to the head/brain, and one to their sexual organs.

If one person is removed prematurely from the trap-setup, all the "explosives" buried in the mountain, which they are all connected to, one each, will all go off at the same time. Hence, the hostage situation.

All "explosives" are disarmed now.
They will get taken away from all G2+ in next hours.
All but orions had these "explosives".

The last special cleaning announced in the last post is done now.
This was some global shit from lsa3 group, which was installed in all but lsa3 and orions.
A lot of us have big side effects from this cleaning.

Here are some details:

Visual:
I can see a lot of people. They are each getting followed by a dark cloud above them. They have their own personal "negative cloud". seems to be millions of people.

It seems as though the clouds perpetually sap the energy of these people, and keep them drained; less than 100%. So all these people are wandering/stumbling around, looking quite weak.

Periodically, the clouds "thunder", and suck even more from the people; and they look incredibly weak after this, hardly able to stand.

This cleaning is related to a "personal dark system" for/connected to millions of individuals, each personalised & customised to effect the greatest damage & effects to their health.

It is an extremely powerful energy-sapping mechanism. Energy video helps temporarily, but as soon as it is switched off, the drain-effects are felt once again. It saps you continuously, with no break. Endlessly, you are forced to operate at half or less of your potential energy (which is itself a MASSIVE difference). It makes you listless, apathetic, you never want to do anything; and when you finally do, you will never have the sufficient resources/energy levels to do it properly, thus endlessly promoting your frustrations. And there's no way out of it. It never leaves you alone.

It's removed now from all G2+.

The special cleaning at ~ 05:00 CET I mentioned two posts above is done.
These has been a system of taurus group:

Visual:
I can see people lifting their hands, as though praying. This is having two effects. Firstly, their energy (of this local group) is getting "put into" a "core" structure above them, in the air.
Simultaneously, and secretly, their energy is getting drained just as much by a hidden core which is buried under the surface of the earth.
It seems that these structures affect billions of people, anyone who prays; excluding those protected by the Protoi (shutting down religions declaration). I can see a guy like that, there is a black shield around him, a "NULL/nullifying" shield. Although his hands are also raised, zero energy is leaving him upwards to the above core; and zero energy is leaving him below to the hidden core.

There appears to be many, many cores (of both kinds) all around the Earth. Each "local group" seems to have their own core, and there are just as many hidden cores underground which suck energy.

It seems this entire system is a "survival mechanism" for darks.

This system is a big religious-based survival mechanism for darks. This is a "2-for-1" system, not only do you lose your energy freely by voluntarily giving it away "above" to help darks survive and keep killing you, but your energy is also secretly sapped from "below", many many hidden "core-generators" that double your total energy output. Therefore, you lose in two ways at once. If you are sensitive at all to your energy levels, you should be able to sense this draining going on. If not, you will keep doing it, totally unaware of the dastardly scheme to drain your energy, going on. And nothing will change.

This energy system has done "wonders" to prolong dark systems' survival and also that of the darks themselves. It is now finally going to be permanently disabled and destroyed for good.

The system is completely destroyed.
Top

This wave and the wave before created some clear impact on the Schumann's: 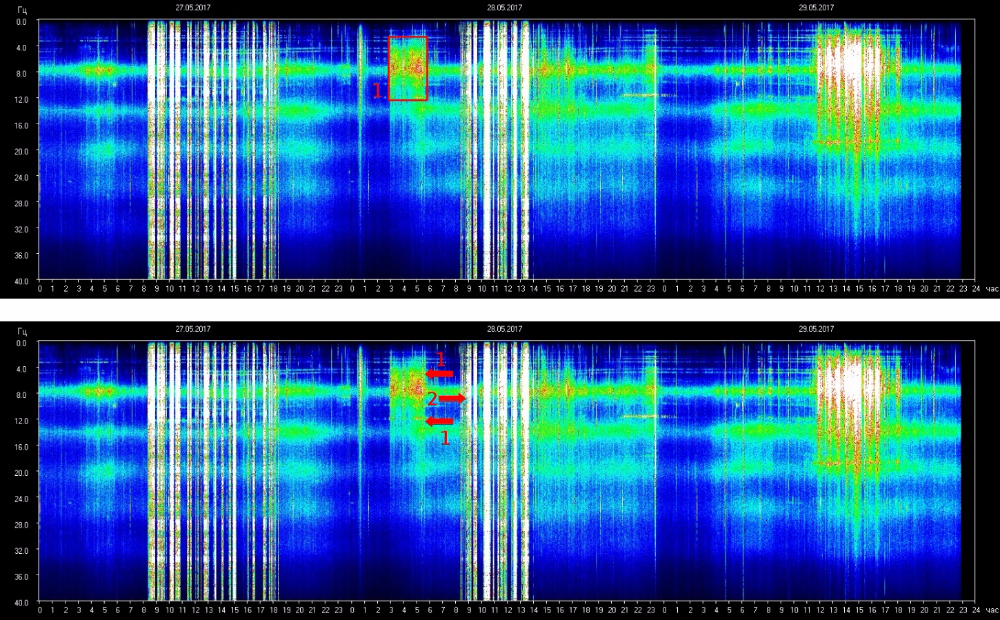 #1 Are the effects of the wave before this wave.
You see in the above chart a framed area.
These effects on Schumann's were created by attacks on our people (~630 million got attacked).
The former wave finished these attacks immediately.